You get to Detian waterfall from Nanning via a bus from Langdong bus terminal in the east of the city (the bus goes right to the entrance of the waterfall scenic area).  Google claims that Langdong bus station isn't far away, so I'm on the street at 7:50... and first wait a quarter of an hour for a taxi. Which drives straight into the inner city traffic jam and is stuck there.
So I at least buy a ticket at Langdong for the next day (for 94 yuan), and get back to the hotel, check in again.  There's still something to see in Nanning, the Qingxiu Mountain, a big park.  That's good for a whole day.  The most interesting thing there are the cycads: that's a pretty ancient seed plant, which resembles a tree fern, and probably have descended from those.  But they have real seeds.  Since cycads grow very slow, they get very old, and the Chinese love everything which is a symbol for "long life".  The cycads are also an evolutionary sign for long life: they exist for 300 million years now, morphologically mostly unchanged. 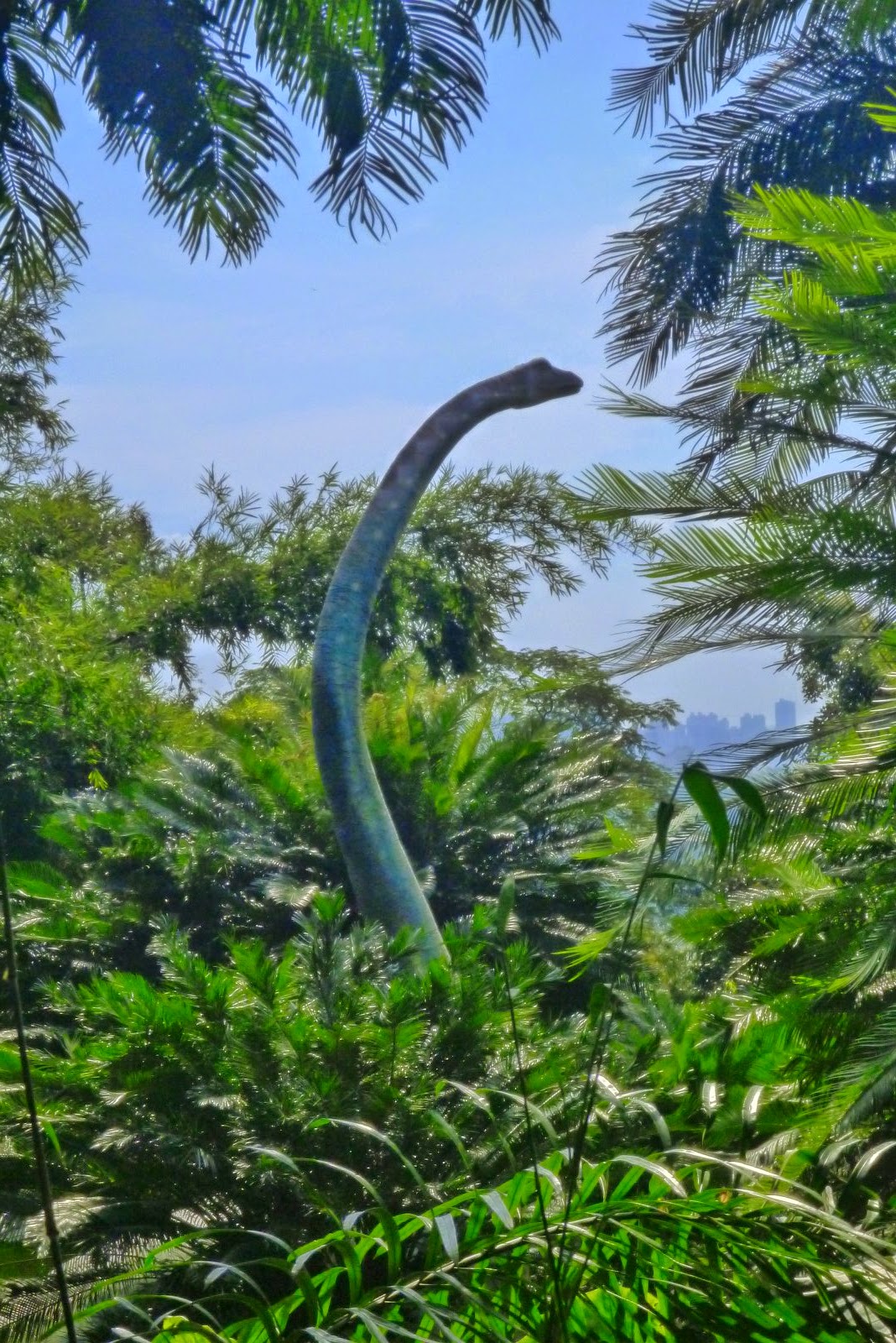 So on the next day, I get up an hour earlier, catch a taxi quickly as not many people are on the road to compete with me, direct that taxi to the right road (not through the traffic jam in the inner city, but to the express way), and, yes, am pretty early at the bus terminal.  Ok, better too early than too late...
The tour to Detian itself is worth a journey just by itself, since not only the famous Guilin, no, most of Guanxi is covered with beautiful carst hills.  The closer we get to the vietnamese border, the more beautiful the carst hills get.  At 2pm, the bus finally reaches Detian scenic area, and dumps a few travelers.  It's pretty far from Nanning, you can't do it in one day, and there's not that much to do in Detian.
I couldn't preorder a hotel here, so I take the "Rucksack Inn", a nice little family hotel, and definitely 3 stars for a backpacker hostel (and the German word for "backpack" is indeed "Rucksack" ;-): there's a toiled and a shower in the room, a TV, aircon, and free Wifi.  That's all optional for a backpacker hostel.  Of course, the shower has only cold water, but what do I mean with "cold"?  They can't obtain that cold water here that it becomes uncomfortable ;-).
Ok, so let's get to the waterfall.  The thing has two parts, on the right the Detian waterfall on chinese territory, on the left the Bản Giốc waterfall on vietnamese territory.  Some rumors are that the entire waterfall was once vietnamese, until the Chinese conquered the better part in the sino-vietnamese war in 1970. 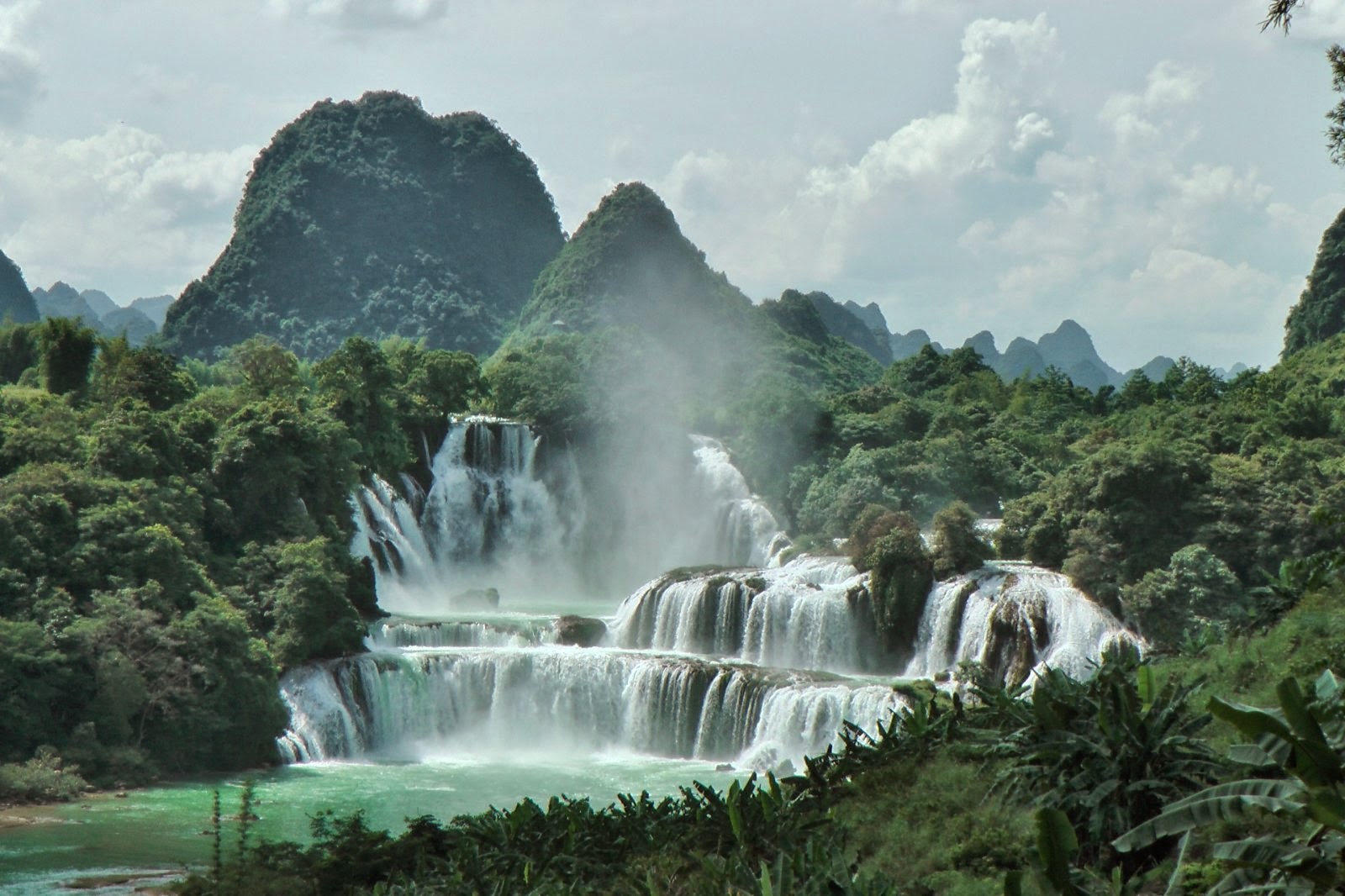 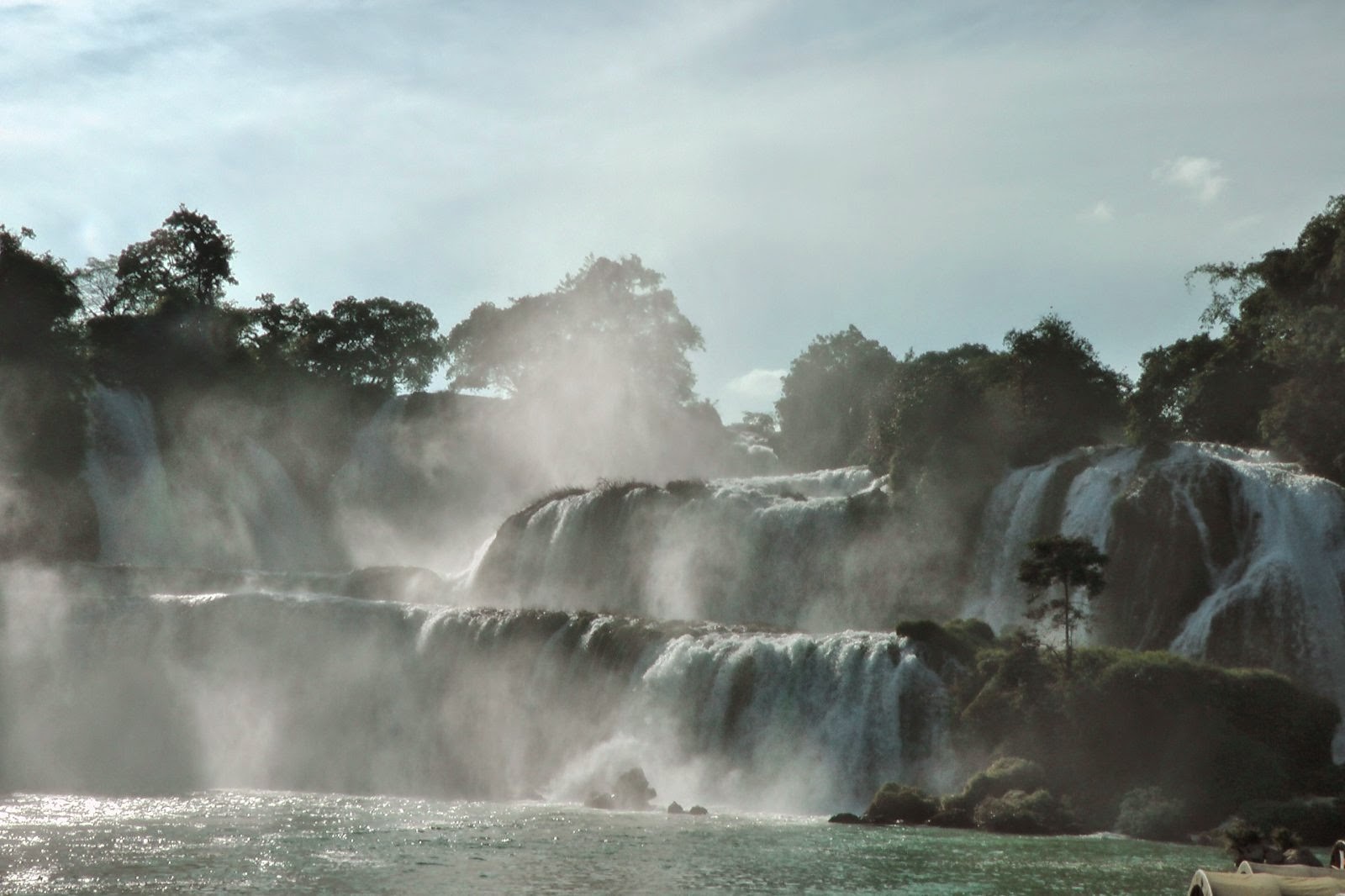 On the upper side of the waterfall there is a sheer endless "Hallo" street, and that's for sure the biggest cross-border "Hallo" street, since it continues behind Stone nr. 53 in Vietnam (a "Hallo" street is a street full of merchants shouting "Hallo" at all the customers). 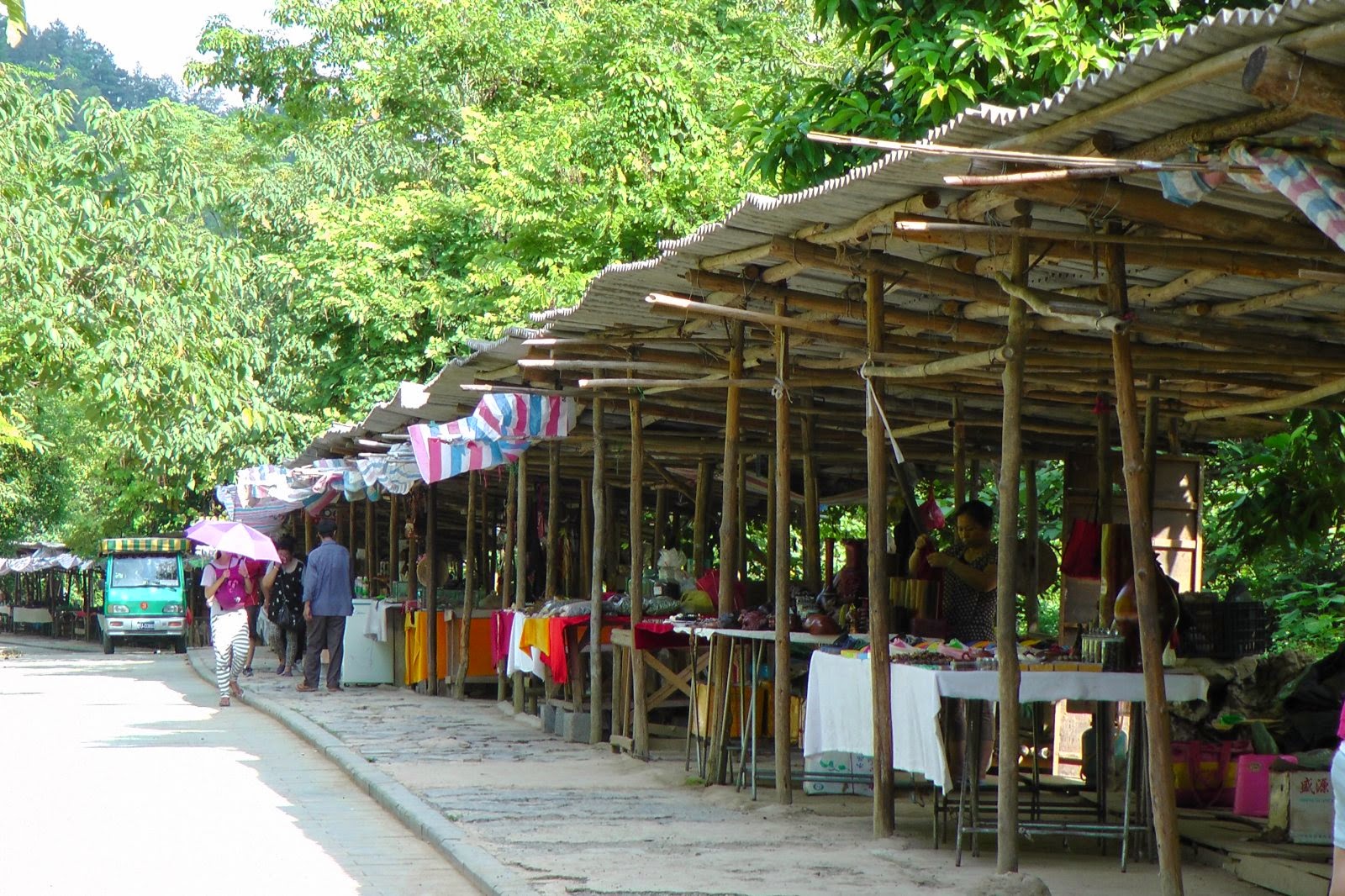 The highly weathered border stone has a shortly refreshed inscription on the side visible from Vietnam: "China, Guangxi province", on the chinese side there's nothing.  It's said to have a frontier guard here, but today, there's no sight of him.  Apparently, the two sides agreed on a local frontier traffic, and the only check is on the street further up, if everything's all right.  Most of the merchands (including the chinese side) are actually Vietnamese, who are busy to learn Chinese (using a phrase book).  Ok, it's not that clear, which citizenship these people have: all the people here are minorities who speak Mandarin as second language. 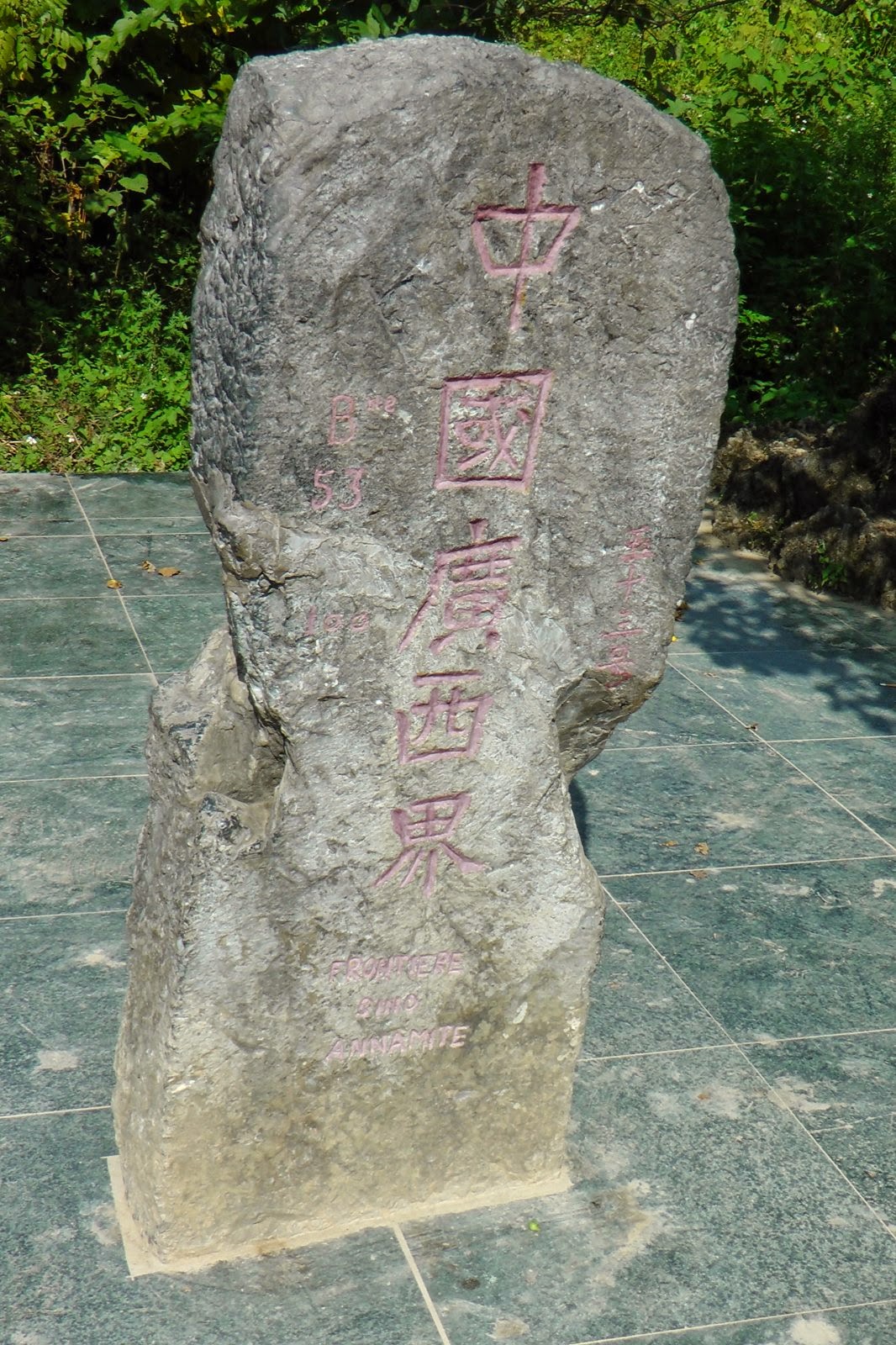 The next day I go back to Nanning, since there's no other place you can get from here.  A small bus takes me for 15 Yuan to Daxin, the next city with (quite oversized) bus terminal, and from there, every 90 minutes a bus goes to Nanning (for 61 Yuan), to another bus terminal (the one in the west).  Travelling back therefore is cheaper, but I've to add the taxi price to that sum.
In the meantime, May has started a serious conversation, questioning whether travelling alone couldn't be improved by travelling together with someone else, and of course, I send her pictures - some right from the scene, and more in the evening.  For whatever reason, China Unicom warns me that I'm in dept, even though I've a flatrate for 330MB internet in September, and September has just started - but the people in the family hotel know how to deal with that and charge up my card with 50 Yuan.
Posted by Unknown at 9:13 AM